By 11 a.m., the first hungry customers start milling about outside of James Purifoy’s burger joint, 15th & Chris in Rockford, Illinois. By noon, the line often snakes around the small, red building and into the parking lot.

“Some of the customers I see so often that I already know what they’re ordering, just by the way they’re standing and looking at me,” says Purifoy. 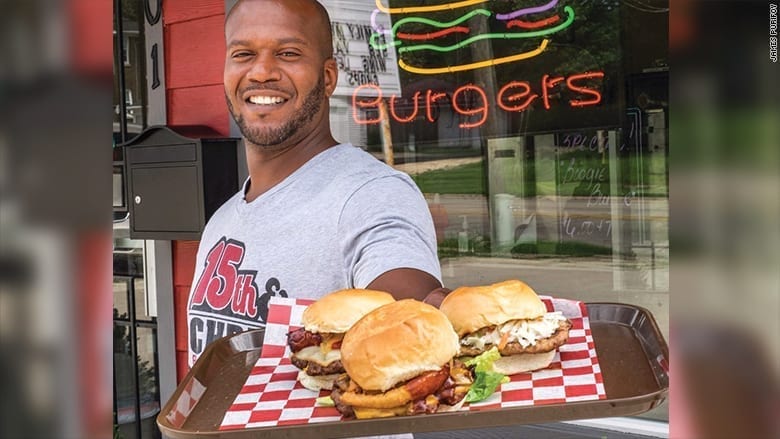 Purifoy opened 15th & Chris in September 2014 and in less than four years, he’s become a local culinary celebrity. The no-frills operation offers no indoor seating, just a few picnic tables out front. But people come from miles around for Purifoy’s burgers.

“They’re not just coming from 20 or 30 minutes away. Someone in Minnesota saw my review on social media and ended up at 15th & Chris to try my burger,” he boasts.

Purifoy created every burger recipe on the menu and named them himself.

Among some of the most popular burgers is The Mackaveli, a patty with BBQ sauce, melted cheese and beer-battered onion rings. Then there is The First Lady burger, which is basted with steak sauce and topped with Swiss cheese, mushrooms, grilled onions and mayo. 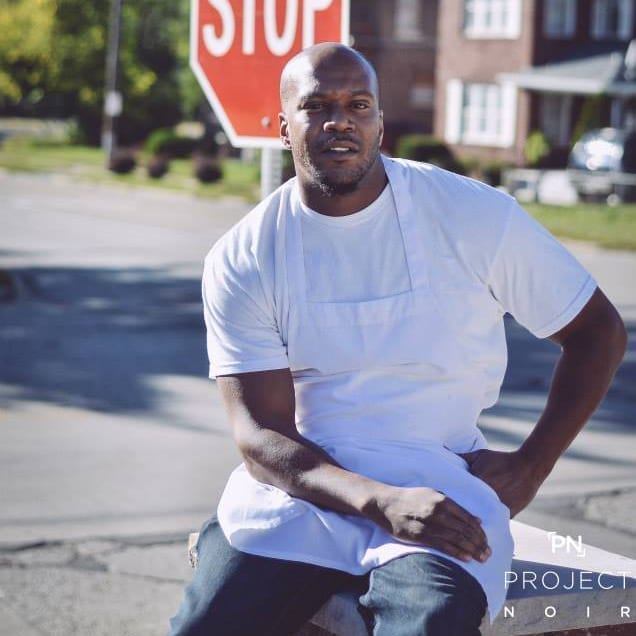 Oddly enough, Purifoy says he wouldn’t be here if he hadn’t served time in prison.

Surrounding 15th & Chris are the housing projects where Purifoy and his siblings were raised by their mother. “We were six kids and she was a single parent with multiple jobs,” he says.

Although he was the first in his family to make it through high school, he says “inner city street life” eventually consumed him. “I was in a gang. I had a gun, I was dealing drugs to make money for myself and for the family,” he recalls.

He was arrested multiple times as a teenager. Then, when he was 17, he shot a rival gang member. “I never thought it was right, but I didn’t want to die either. For me, I had to stop them before they got me,” he says. 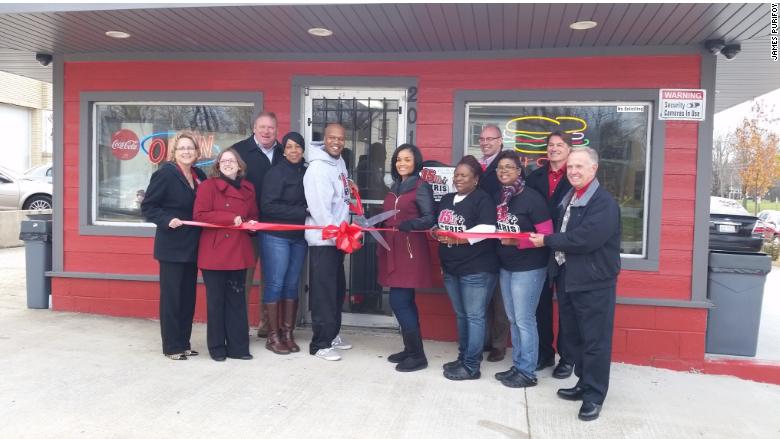 At 19, he was sentenced to 10 years in prison. Walking into the penitentiary was a wake-up call. “I decided prison was not going to be my revolving door anymore,” says Purifoy.

He took classes to pass the time. He pursued an associate degree in automotive technology, followed by vocational certificates in custodial services and building maintenance. But it was the associate degree he attained in culinary arts that struck a chord with him.

“I remember watching my mom cook and wondering how she made things taste the way they did. It always intrigued me,” says Purifoy.

Eventually, he became head chef at one of the prisons where he was serving out his sentence. While there, he designed and cooked meals for an inmate population of 2,800. As his confidence grew, Purifoy knew cooking would one day help him get back on his feet.

In 2004, Purifoy was released. He was 29 years old. At first, he landed odd jobs and took business classes at a local community college. He saved his money and started a small trucking company, JFP Trucking, which he ran for a few years.

Work was steady, but his heart wasn’t in it. “Cooking was my passion,” he says. The self-described “burger fanatic” couldn’t stop thinking about how the neighborhood was desperately in need of a great burger joint.

In 2012, Purifoy drove past an abandoned shack that used to sell ice cream. “I thought, well, there it is. I’m going to open my burger spot there.” 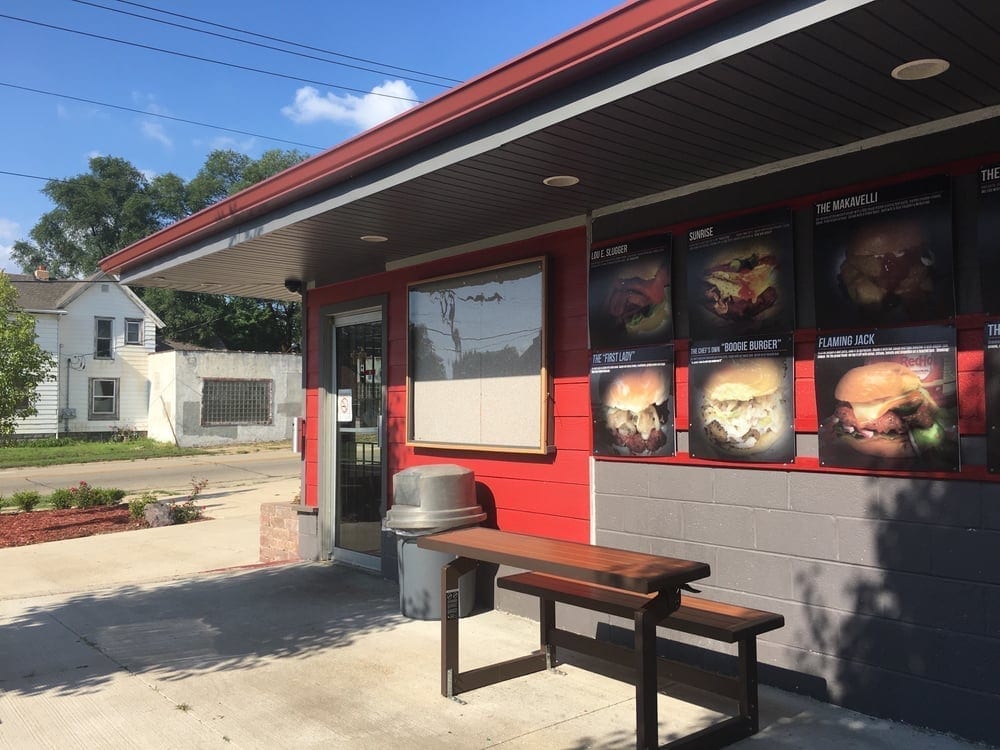 Purifoy sold JFP Trucking to raise capital. He also received a $50,000 grant from the city and drummed up additional help from family. Two years later, after putting a total of nearly $100,00 into renovations, he opened 15th & Chris.

Today, the business has 10 employees, including a few workers who have served time in prison. “These are people from all walks of life. They’ve been to prison and just need a chance now for a fresh start,” says Purifoy. “They need jobs.”

Purifoy starts his day shortly after 5 a.m., helping his wife Latasha get their five young children ready for school. After that, he heads to the restaurant where he cooks and helps serve the food.

The business is now profitable and Purifoy is looking to expand, he says. Last year, he bought a food truck to cater events, but now he is using it every day to sell his burgers around town.

Up next: To open another restaurant in Rockford, one with more indoor space so he can offer table service. Across the parking lot from 15th & Chris is Penguin Foods, a third-generation meat shop and catering business.

“He buys ground beef and sausages from us for his restaurant,” said owner John Ciembronowicz. Purifoy, in turn, uses the freezers in Ciembronowicz’s shop to store his supplies.

“We help each other out,” says Ciembronowicz. “The way he’s turned his life around is incredible. And he’s helped to revitalize this area, too…Small businesses like ours are vital to this community.”

Purifoy is trying to give back to the community in other ways, too.

“I speak with inner city kids just like me and I’m very upfront about my life story,” he says. “I tell them that education is everything. If you know better, you do better in life.”

I must admit, when I started to see posts here and there about Popeyes, I thought

I must admit, when I started to see posts here