Gun ownership amongst Black women is on the rise. An increase in firearm sales is largely tied to self-defense and appears to be a growing movement among Black women across the country. 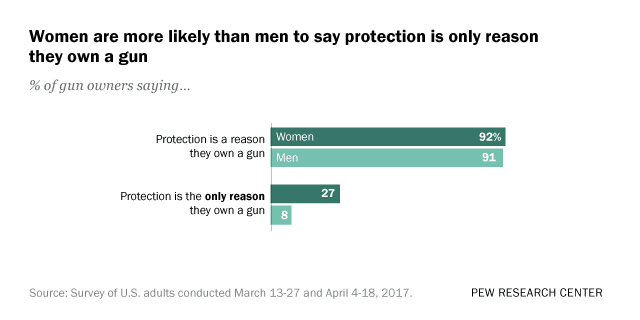 A study by the Pew Research Center found almost two thirds of Black households now viewed gun ownership as a ‘necessity’, compared to less than a third in 2012.

Philip Smith, who founded the National African American Gun Association in 2012 during Black History Month, said he was stunned by his group’s rapid growth, to 20,000 members in 30 chapters across the country, today, the majority of whom are women.

‘I thought it would be the brothers joining,’ Smith said. But instead, he found something surprising – more Black women joining, most of them expressing concerns about living either alone or as single parents and wanting to protect themselves and their homes.

The recent shootings of Black men and boys by cops around the country have left Smith and others concerned that racism can make a black person a perceived threat, even when carrying a firearm legally.

His organization take pains to coach members on what to do when stopped by police, but not everyone is comforted.

‘It’s disheartening to think that you have everything in order: Your license to carry. You comply. You’re not breaking the law. You’re not doing anything wrong.

And there’s a possibility you could be shot and killed,’ said Laura Manning, a 50-year-old payroll specialist for ADP from Atlanta. ‘I’m not going to lie. I’m just afraid of being stopped whether I have my gun or not.’

One new gun owner Jonava Johnson, says it took her a long time to decide to get a gun. For years she was afraid of them after an ex-boyfriend from high school threatened her and shot and killed her new boyfriend in front of her. She was just 17.

At first she just bought a guard dog, but in recent months, she turned to firearms for defense.

‘I think that’s the way it’s always been in the black community: It was never OK for us’ to own a gun, said Johnson, 50. But now? ‘I hope I never have to kill anybody, but if it comes down to me or my children, they’re out.’

And she is not alone. From church ministers and tax analysts, to glamorous flight attendants, Black women from all different walks of life are picking up firearms and learning how to shoot.

Dana R. Mitchell, a 47-year-old minister at Destiny World Church outside of Atlanta, said she had been in a household with firearms, but ‘always had that fear.’

That changed after she was invited her to the range with some other women, she kept seeing news reports of violence and a friend had her purse stolen while pumping gas.

‘I woke up one day watching TV and I said, you have to get over this,’ she said. She’s now more aware of her surroundings and is learning how to prepare herself in case she becomes a potential victim. ‘I don’t want this sweet face to fool you.’

Markysha Carter, a 40-year-old marketing specialist for a bank, wants to make sure she stays safe should she ever be stopped by a police officer.

Marchelle “Tig” Tigner is founder of Trigger Happy Firearm Instruction LLC. ‘Tig,’ is on a mission: to train at least 1 million women how to shoot a firearm.

She had spent no time around guns before joining the National Guard. Now, as a survivor of domestic violence and sexual assault, she wants to give other women of color the training she hadn’t had.

She says self-defense is not about killing someone, but is instead about eliminating a threat.

Once self-defense skills have been mastered, the next thing to improve would be the gear that is being handled itself. For those using a Glock to protect themselves and their homes, articles like this, regarding sights options, should be extremely useful: https://outdoorempire.com/best-glock-43-sights/