Back in the not-so-good-old days of cruising, women were considered to be bad luck on ships, a distraction to the crew and an anger to the seas. Until the 1970s, many professional maritime academies didn’t admit women, and there were no female cruise ship captains until 2007.

Things are definitely getting better for women in the cruise industry: They now make up 18 to 20% of the workforce. But there’s still a long way to go. Of the more than 300 passenger cruise ships worldwide, fewer than a dozen have female captains at the helm and it’s still a rarity to find women in the upper echelons of the cruise industry, since women only account for 5.4% of officers.

But those statistics didn’t let Belinda Bennett — the world’s first black female cruise ship captain— hold her back. Bennett has worked for the small ship line Windstar Cruises for 14 years and sails the MSY Wind Star through the Caribbean in winter and Europe in summer. She recently won the U.K.’s prestigious Merchant Navy Medal for Meritorious Service. With International Women’s Day and Women’s History month just around the corner, we caught up with this trailblazing woman who is making history and helping create a sea change in her industry.

Starting Out: I originally came from a small island called St. Helena, which is in the South Atlantic Ocean between South America and South Africa, smack bang in the middle of the Atlantic, miles from anywhere. Growing up on a small island, from the age that I could walk I was in the water. I loved the ocean. It used to be that the only way off the island was by ship. So when I was 17, I took a job on the RMS St. Helena, the ship that supported the island. That’s when my adventures started.

Overcoming Challenges: Unfortunately, I had a rough start. When I was training as a cadet, I sailed with chief officers who made me work harder than the other guys. During your cadetship you’re starting out as a sailor, so you do every job that they do. I had a chief officer, unfortunately, who made me work later than the sailors, so they would knock off for the day, and I would be left outside continuing to work until it got dark. It really was a make-or-break-you time, and me being me, I refused to be broken.

Breaking Barriers: After working on a private yacht off of Monaco for over two years, I did a stint on the Isle of Man Steam Packet ferries. Then I went back to school for my masters. After that, I tried to go back into yachts, but I was unsuccessful. The yachting industry wasn’t quite ready for me at that time. I remember being sat down by an agent in Antibes and being told that finding a job in the yachting industry would be very hard because of three things: 1) I had a higher education than most captains at the time; 2) I was a woman; 3) I was black. So I had to reevaluate my options, and Windstar, here I came. I got a job with Windstar Cruises in 2005.

Rising Through The Ranks: I came to Windstar as a second officer. Eventually, I went to chief officer. And then in January 2016, I was made captain of the MSY Wind Star, a four-masted sailing ship with 148 guests and 101 crew.

On Success: I had goals in life, which I’ve succeeded at, and I’m a very strong woman. Being a woman, you have to work extra hard to prove yourself — even more than a man. Some men might not like that, but that’s the way it is. I’m driven. I wanted to be captain, and so, I am.

Meeting Guests: The Wind Star is a small ship, and we have an open bridge policy, which means you can stop by at almost any time and visit me on the bridge. This is a rarity in the cruise industry. The hotel manager and I also like to greet our guests on the gangway when they arrive. Some people say to the hotel manager, “You’re the captain?” And the hotel manager loves to say, “No, she is.” You get all different reactions. It’s quite fun to watch. I think the women love it. Some men are in awe, and some are slightly “What, you’re the captain?”

Role Model: I like to think that I’m a role model for other women. When I first came to sea, there were only five of us in a class of seventy-something. Over 20 years later, out of the five of us, I’m the only one still at sea. I do like to encourage women to come to sea.  There’s been an increase in women working at sea, but it’s not happening fast enough — or as fast as I’d like to see it, anyway.

Inspiring Women Staffers: To the women on my staff, I tell them, “When you put your mind to something and you really want something, you will work for it. And if you really really want it, no matter what obstacles come in your way, you can overcome those obstacles.”

Being A Woman Leader: As a woman, you can get away with a little more. You can be more direct and you can pretty much tell the guys how it is. If I don’t like something, I’m going to say it. I think men-to-men can be more confrontational. I never have that situation. Whenever I have constructive feedback to give, I like to end on a high note. Open communication is key in this job. If you can talk to your team and get them to talk to you, life is a lot easier. 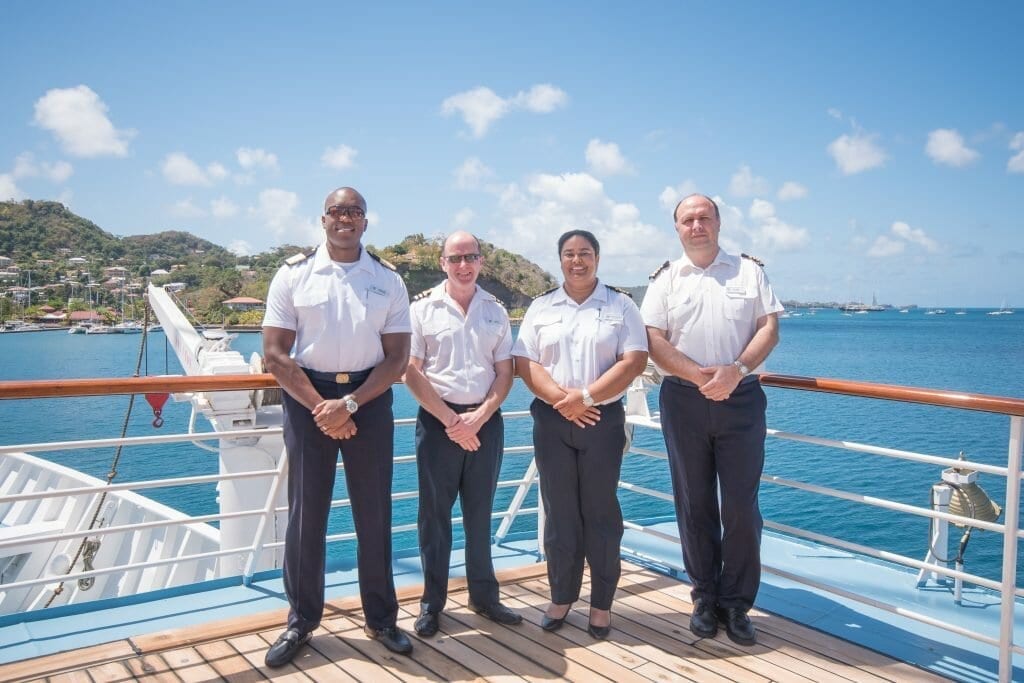 Favorite Places: Any Italian port with leather bags and leather shoes, I am there. Bequia — a tiny island in the Caribbean — has the best lobster pizza in the world. The best gelato is in Portoferraio on the Italian island of Elba. I’ve been lucky enough to transit the Panama Canal, and the ingenuity is amazing. I recommend you see it at least once in your lifetime.

Inspiring The Next Generation: Every time I go back to St. Helena, I go to a high school and I talk to the kids. I tell them, “Look, I was once in your chair. I was schooling just like you, and then after so many years, I am now captain on a cruise ship that travels throughout the world. I love traveling. Being paid to travel? Bonus! ”

On Determination: When I first came to sea, the more someone said, “You will never make it,” the more determined I was to make it. I’m very headstrong. My parents will definitely agree with that. You need to be determined, you have to be a strong person. You will have a lot of challenges along the way. Doing this job, you will meet people who will not accept you being a woman. But the world is changing, it’s getting better.

Advice For Other Women Who Want To Do This: Work hard, be strong and don’t let anything deter you. I’ve done it. You can do it, too.

Lt. Col Merryl Tengesdal, a Bronx native, has become the first Black woman to ever pilot

Justify won the Triple Crown on Saturday, making him only the 13th horse since 1919 to win

They are on screen for less than 30 seconds, a couple in simple embrace. The man,

Lt. Col Merryl Tengesdal, a Bronx native, has become the

Justify won the Triple Crown on Saturday, making him only