When Angelique Brunner moved to the nation’s capital two decades ago, she was shocked to find neighborhoods with no stores, no services, and burned-out buildings. 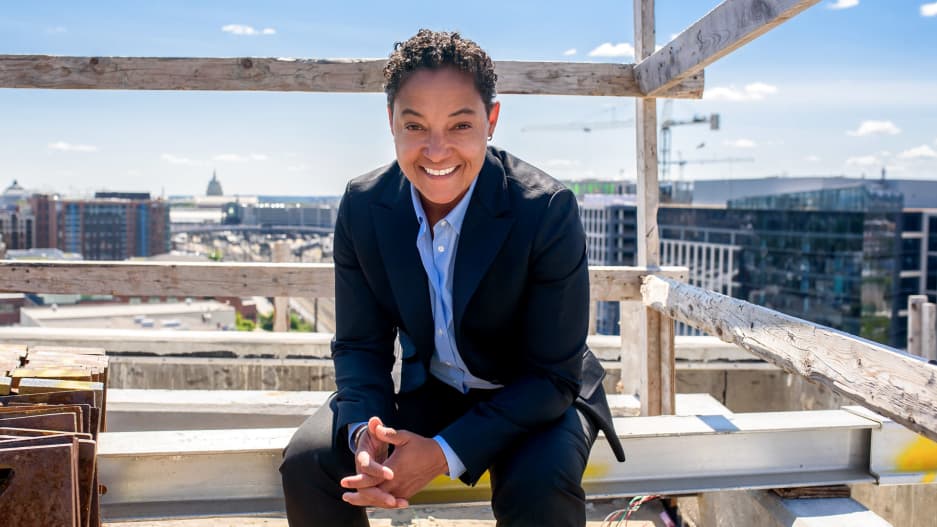 “I started asking around about what is going on here, people told me it was the riots,” she tells Fast Company. “I said, ‘Oh, what riots?’ They said, ‘The Martin Luther King riots.’ I said, ‘The riots were in 1968. So, this is why D.C. doesn’t have grocery stores, and it’s giving away houses for a dollar?’”

The local city government was, in fact, selling off long-abandoned homes for a buck to developers who had the money to rebuild. Some of Washington’s once vibrant black neighborhoods never quite recovered from the unrest in the days following the assassination of the civil rights leader and the subsequent departure of the middle class.

Brunner was stunned and, armed with her degrees in public policy from Brown and Princeton, started learning the ropes in venture capital and then real estate development—determined to make a difference.

And she is making a difference, bringing jobs, homes, and new business to once blighted streets.

As president of EB5 Capital, which she founded a decade ago, Brunner is now one of the driving forces in the revitalization of D.C., leveraging a controversial program that puts rich foreign investors on a path to citizenship in return for their investment dollars.

FOUNDING HER OWN COMPANY

The road to founding her own firm was paved during those first years, initially at a VC firm. “I  was the only African American female from New York to Atlanta that was in venture capital.” She later moved to Fannie Mae (the Federal National Mortgage Association), where she became an expert in community investing.

“Laypeople might assume that urban areas struggle to get development dollars because no one wants to build there. I learned through the late 1990s and early 2000s that there has always been interest, just not the financing needed to actually execute,” she says.

It was during this time that she became familiar with the EB-5 Immigrant Investor Program and saw an opportunity to bring development dollars to neighborhoods that others did not want to touch. So with the gap in money needed persisting to complete urban projects, and the scars from the riots still showing, she founded EB5 Capital.

“I felt motivated to address this, which is why my second project ever was a grocery store on 7th Street in Northwest D.C. that also had an affordable senior housing component,” she says.

Brunner sees her mission as twofold: Rebuilding the capital’s neighborhoods and bringing new jobs to people who desperately need them. And she is an unabashed fan of the EB-5 program, which is up for renewal—and reform—in U.S. Congress. Job creation is at the core of the program, which was founded in 1990 and is administered by U.S. Citizenship and Immigration Services (USCIS). It offers foreign investors green cards in return for job-creating investments in domestic development projects.

“People are willing to invest in the United States for an expedited visa process. The only hitch is that you have to create jobs with the money they invest,” she says—10 for every $500,000.

“We are focused on job creation, but livable cities require jobs and affordable housing,” Brunner explains. Gentrification, like the luxury apartments that now make up the O Street Market, is necessary, but there are ways to mitigate the displacement that sometimes follows.

“First, as a financier of multifamily housing developments, we are able to advocate for higher than required moderate- and low-income housing set-asides,” she says. “We work with a particularly sensitive developers committed to the mixed-income fabric of our neighborhoods.”

EB5 Capital’s latest project in Washington, D.C., has 14% of its rental units set aside as affordable housing–the District of Columbia’s inclusionary zoning program only requires between 8% and 10%.

The company also focuses on bringing living-wage employment opportunities to areas that need them. “Be it working in the construction trades or an entry-level position at one of our hotel projects, I believe jobs that present meaningful advancement opportunities, located in the areas that are being developed, are very important to strengthening the fabric of a mixed-income community,” Brunner adds.

“You can actually have financial gains in a neighborhood that don’t necessarily change the racial fabric of a neighborhood initially. To me, the only way to address the addition of economic opportunity is to consciously create mixed-income neighborhoods.”

EB5 Capital is now worth $500 million and has 35 employees with 12 nationalities who speak 16 different languages, and have visited more than 90 countries. The  company’s portfolio also expands to cities like L.A., New York, and Nashville.

Brunner and her firm have an unblemished history with the USCIS, but the EB-5 program in recent years has come under increased scrutiny.  “I think our company has used the program effectively and in a way that creates a cascade of benefits for their respective cities, including new jobs, new housing, and new business opportunities,” she says.

Still, critics have called the sale of citizenship to high bidders unseemly. The AP reported that in return for nearly $8 billion in investment, the USCIS has approved 40,000 visas for Chinese nationals and their families.  A company owned by Jared Kushner, President Donald Trump’s son-in-law, came under SEC scrutiny earlier this year for its dependency on EB-5.

And just this week, more than a dozen Chinese investors in Royal Palm Beach in South Florida sued, claiming they were defrauded by American developers.

Brunner, who has testified before Congress on reforming the program, says she supports efforts to tighten accountability.

“The EB-5 industry has been advocating for new legislation for the program, and I am in full support of strong integrity measures to ensure it’s being used as intended and in a lawful manner,” she says.

Ayesha Selden is a self made millionaire who has amassed