Howard University swimmer Latroya Pina of Seekonk, Massachusetts will swim for Cape Verde at the 2020 Summer Olympics in Tokyo, Japan alongside her siblings, Troy and Jayla,.

The siblings were selected to represent the Cape Verde National Swim Team in the Confederation Africaine de Natation Championship Meet, scheduled for Sept. 10-16 in Algeria.

They learned recently they were selected to represent the Cape Verde National Team at the Confederation Africaine de Natation Amateur Swimming and Open Water Championship Meet, scheduled for Sept. 10-16 in Algiers, Algeria. They’re the first team the island African nation has fielded at the competition, a precursor to World Championships in South Korea in 2019 and the 2020 Olympic Games in Tokyo, to which the team is granted an automatic berth.

“It’s not far-fetched, three members of one family all going to the World Championships and the Olympic Games,” said Latroya, a senior at Howard University in Washington, D.C. “We’re not just swimming for our colleges or schools, but for a nation so we want to do our best.”

“Latroya received a message via Facebook about it, that somebody wanted to meet her,” said Maria Alfama, the siblings’ mother. “We thought that it was a scam!”

After initial contact with Latroya, the country’s swimming federation – which started in November 2017 — discovered Troy’s times.

“Our mom put up our performances on Facebook and somebody from the Cape Verdean government saw them,” said Troy, a sophomore at St. Peter’s University in Jersey City, N.J. “They have people trying to find athletes for sports.”

The Pinas were informed of their possible selection to the team in February, with their times tracked through an online database. Their mother Maria Alfama orchestrated the siblings’ paperwork to become dual citizens with the Cape Verde embassy in Quincy.

“It was a lot who was who,” Alfama said of coordinating the process with the embassy and the Cape Verdean Sports Ministry. “Once they found out that Latroya had a brother and sister who swam too, everything fell into place.”

The fledgling team — there’s one other member besides the Pinas — might be small, but the responsibility that comes with being on a national team isn’t lost on them.

“Cape Verde is trying to make swimming a big sport now, so it’s our responsibility to represent our country,” Latroya said. “People in Cape Verde and all the Cape Verdeans in the U.S. will be looking up to us.”

Consisting of 10 islands off Africa’s west coast, Cape Verde has a population of a half-million people. Despite being surrounded by water, it doesn’t have any swimming pools. In the past, any individual swimmers participated in open water competitions — which the Pinas plan on doing as well — but the country has initiated plans to build an indoor swimming pool ahead of the 2020 Olympics. 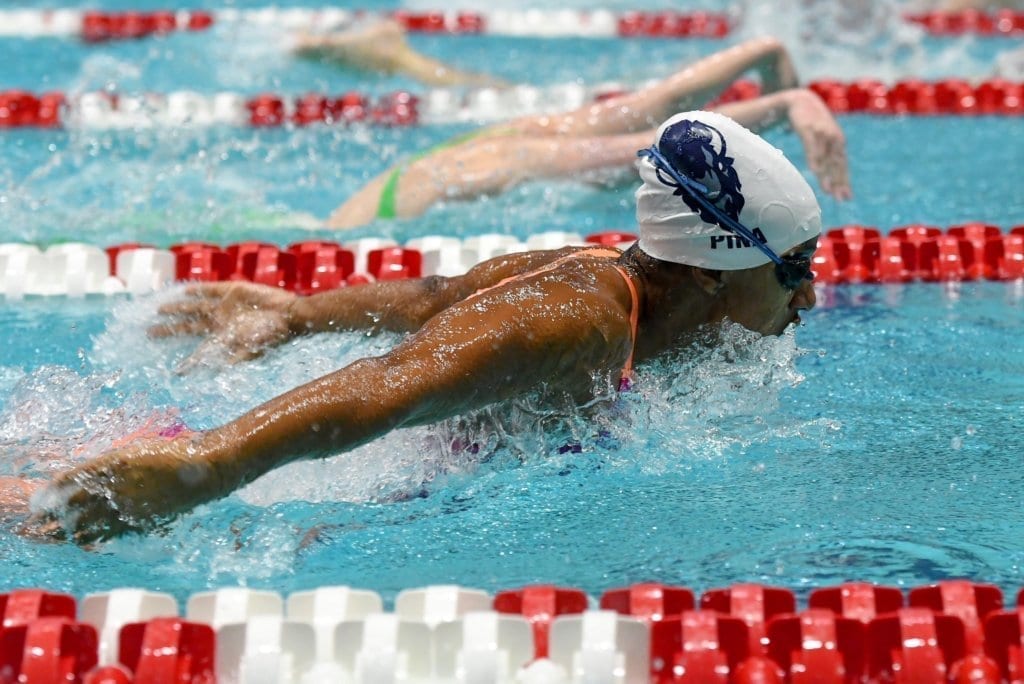 Most of the athletes that compete for the country in any sport are from the U.S.

The Pinas — including Jayla, a rising freshman at Seekonk High — have been swimming as members of the Seekonk High-based Seacoast Swimming Association under former Warrior coach and current Brown University aquatics director Ray Grant and Brian Cameron, the current Warrior coach.

“We’ve worked with Latroya and Troy for the past eight years and with Jayla for the past six years,” Cameron said. “They are all such great kids with great work ethics and this is a great opportunity for them all.”

The siblings have been early risers all summer, heading to morning workouts (7-8 a.m.) at Seekonk High, then afternoon workouts at Brown’s Katherine Moran Coleman Aquatics Center, being in the water 2 1/2-3 hours daily, six days a week.

The Pina siblings do their “short course” (25 yards) work at Seekonk High and their “long course” (50 meters) work at Brown. The Pinas will train locally for the international competition in Algeria. When school begins, Latroya will likely depart from Washington, while Troy will return from New Jersey to make the trip with Jayla and Cameron from Boston to Algeria.

Alfama remembers the Latroya’s start in swimming at age five when she was more interested in gymnastics. One day at the East Providence Boys and Girls Club, a swim team coach suggested she take lessons and swim for the girls’ club team. Five years later, as a 10-year old, Latroya was swimming at national meets.

She was so focused on her academics at Howard University and ambitions to attend medical school that she never thought of extending her swimming career.

“Academics has always been my main focus because once my last collegiate meet was done with, after college it’s the real world,” she said.

Now with the World Games and Olympic Games in the future, she will likely take a “gap year” before continuing post-graduate studies.

“He has emerged as an active leader for our team,” said Mark Kretzer, St. Peter’s head swimming and diving coach. “When he told me about the opportunity to represent his mother’s country of Cape Verde, I knew this would be a once in a lifetime opportunity for him.”

For the siblings, swimming is has been a constant, even while away from home.

“For me, my brother and my sister, swimming never stops,” Latroya said. “Swimming is something we love to do — it’s fun, it’s never been a burden.”

And all of them are proud to represent Cape Verde, an experience made even better with their siblings alongside.

“I am proud to represent the country of Cabo Verde and ecstatic to compete in my first international meet,” Troy said. “It’s a great feeling to also have two siblings competing along with me for Cabo Verde.”

Even more proud is their mom.

“I don’t even know how to swim!” Alfama said. “I was happy just watching. I’ve spent a lot of miles on the road, a lot of hours at pools with them. My life began when they got involved with sports and swimming. I was a super sports mom.”

And while they used to joke about being in the Olympics some day, Latroya said how they came upon the experience was “random” and none of them ever dreamed they’d be this close.

“You always trained harder for the bigger meets when you were in high school and now in college,” Troy said. “Now that we’re going to the African games, then the World Championships and Olympic Games, this is something that we never dreamed.”

Howard University and Amazon Studios have teamed to launch Howard Entertainment, a program designed to diversify the entertainment industry by