Akronâ€™s public schools have a major problem; its at-risk students are falling well behind the rest of the K-12 population in the classroom. The question the district faces now is whether LeBron James can fix that. There are a lot of other schools (website here) who, just like the I Promise school, are looking at how to help young people with their education.

Jamesâ€™ I Promise School opened Monday to serve low-income and at-risk students in his hometown, and the public school could be an agent of change in the eastern Ohio city. The institution is the intersection of Jamesâ€™ philanthropic Family Foundation and the I Promise Network he helped kickstart. 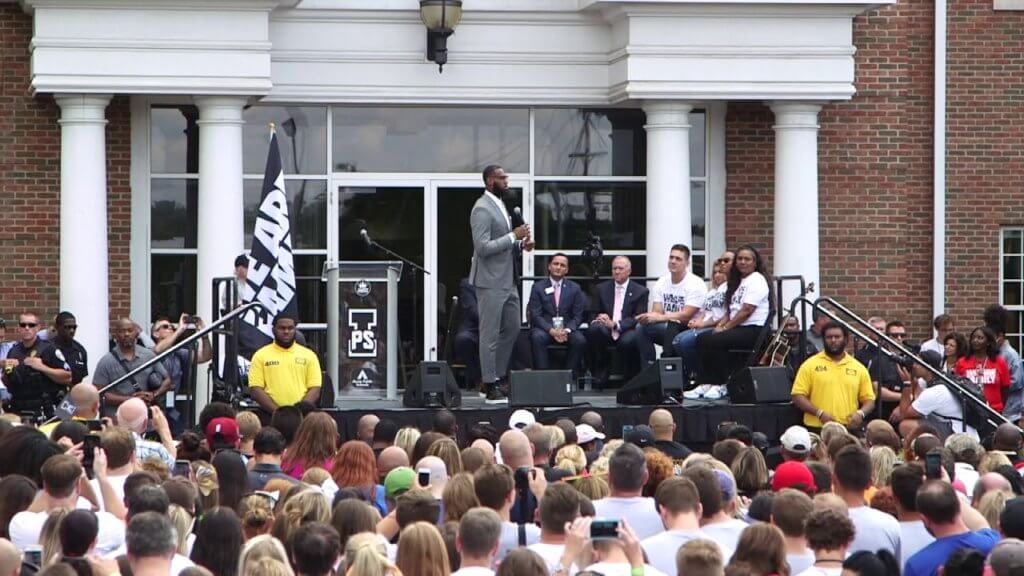 I Promise began as an Akron-based non-profit aimed at boosting achievement for younger students from disadvantaged backgrounds. Now the movement has the means to educate these students year-round.

There are aspects of Jamesâ€™ school that are wholly unique. There are others that build on a tested network of educational reforms. Hereâ€™s why the I Promise School stands out.

I Promise is building from a model thatâ€™s shown success

I Promise will feature longer school days, a non-traditional school year, and greater access to the school, its facilities, and its teachers during down time for students. Thatâ€™s a formula aimed at replicating some of the at-home support children may be missing when it comes to schoolwork. The school has also anchored its curriculum in math and science-based teaching, dipping into the STEM â€” science, technology, engineering, and math â€” curriculum that prepares students for the jobs of the future.

This interweaving of community-building and future-focused learning isnâ€™t new and has succeeded at other innovative schools across the country. 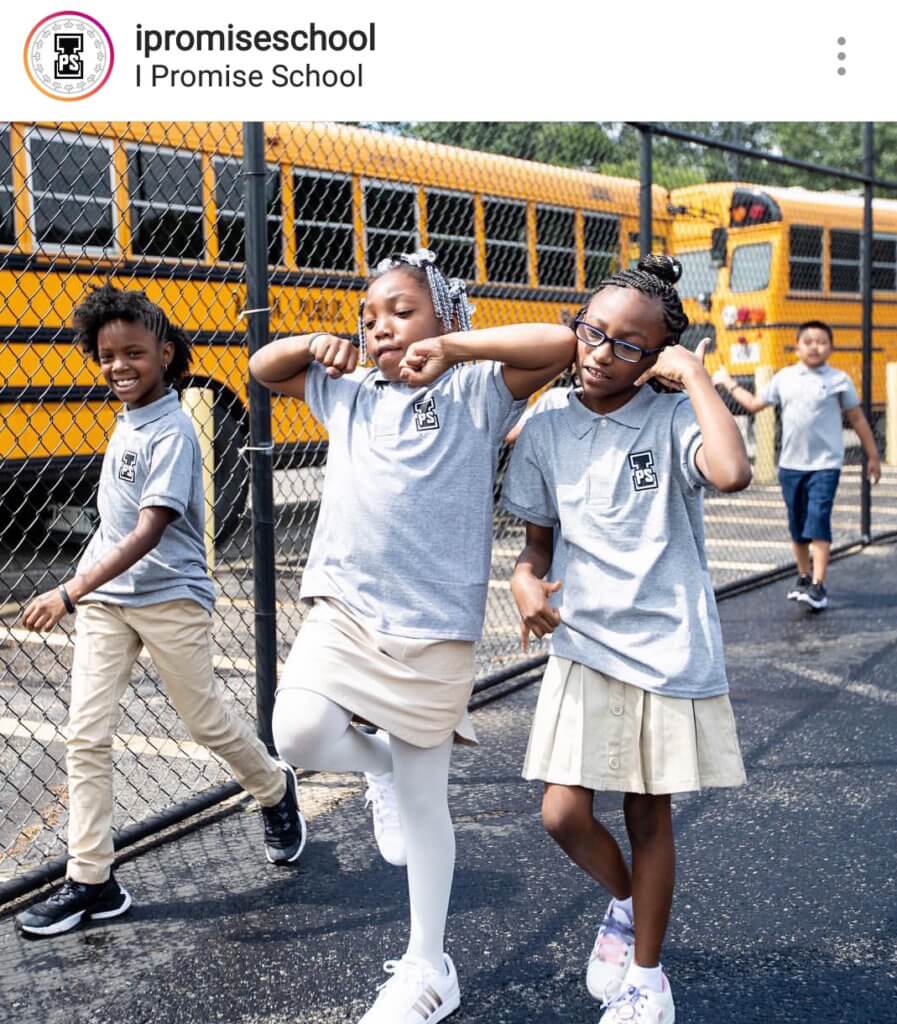 Several reform-minded schools have carved similar paths for I Promise to follow. The Knowledge is Power Program, better known as KIPP, has created the nationâ€™s largest network of charter schools by catering to marginalized students with longer class hours, increasing access to teachers, and a tough but accommodating schedule for students. Rocketship Public Schools, another non-profit charter program with schools in California, Wisconsin, Tennessee, and Washington D.C., operates with a similarly non-traditional classroom. Rocketship emphasizes a STEM-based curriculum while bringing a studentâ€™s home life into the classroom and continuing learning outside regular class hours. Both take aim at reducing the achievement gap between low-income students and their peers.

Itâ€™s still early, but reports from I Promise suggest the school will address Akronâ€™s achievement gap by running similar reforms as other successful national programs. It does not go as far as KIPP or Rocketship in those charges, but itâ€™s clear I Promise is designed to operate at a level beyond the typical public school by creating a more comprehensive experience for students, not just one that begins at 7 a.m. and ends at 2 p.m. 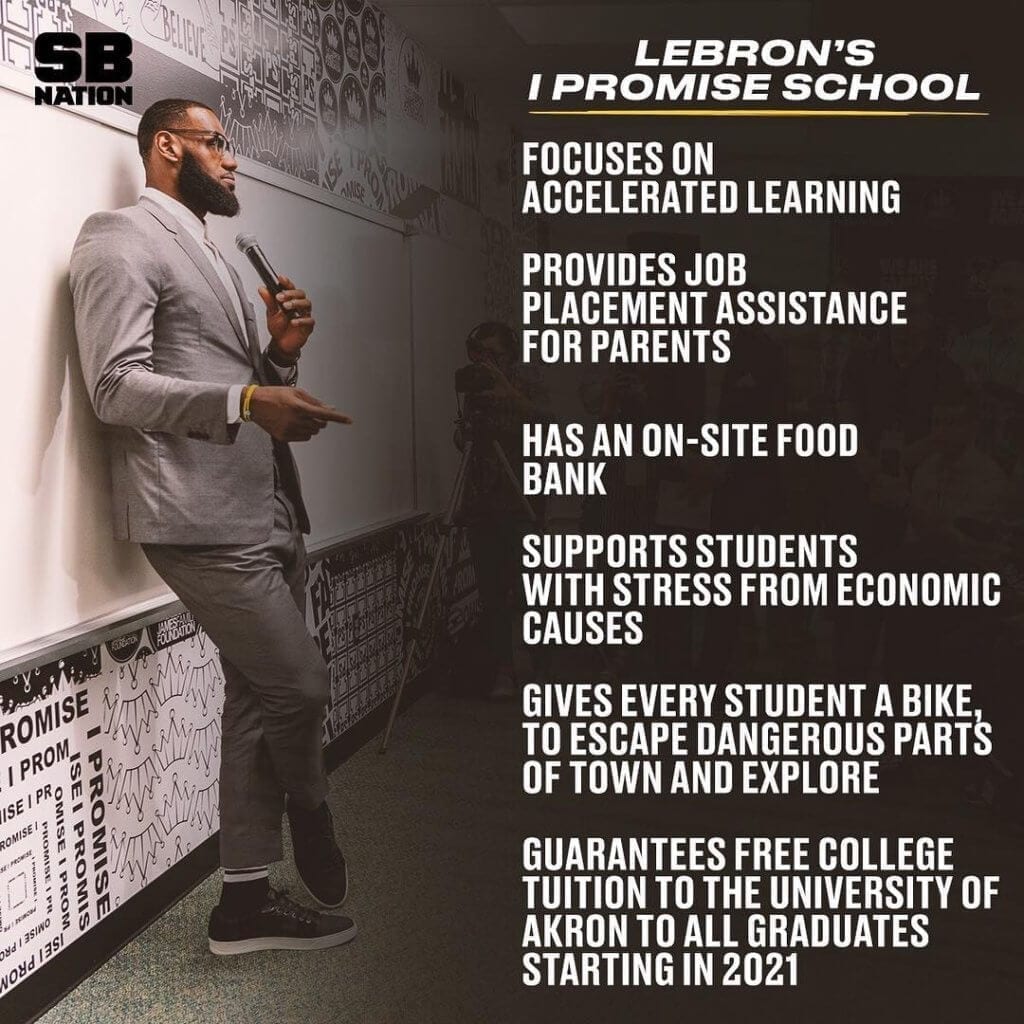 I Promise is a regular public school, not a charter or a voucher-receiving private school

This kind of wide reform is rare to see at a traditional neighborhood school. KIPP and Rocketship schools have been successful in larger cities across the nation, but typically operate outside the purview of their local school boards as charter schools. Several private schools, like Milwaukeeâ€™s St. Marcus Lutheran Schools or Philadelphiaâ€™s Gesu School, have instituted reforms like these while enrolling students using publicly-funded vouchers or tax-credit scholarships.

I Promise is neither. As far as Akronâ€™s records are concerned, itâ€™s another neighborhood public school.

That shows how badly James wanted his school to be a no-exceptions public school. I Promisecould have helped students as a charter school with less local oversight and still served its community. It could have been a private school that enrolled Akronâ€™s underserved students at no cost to them through the stateâ€™s low-income voucher program. In either case, the school would have operated as a separate entity from the school system in which James grew up. 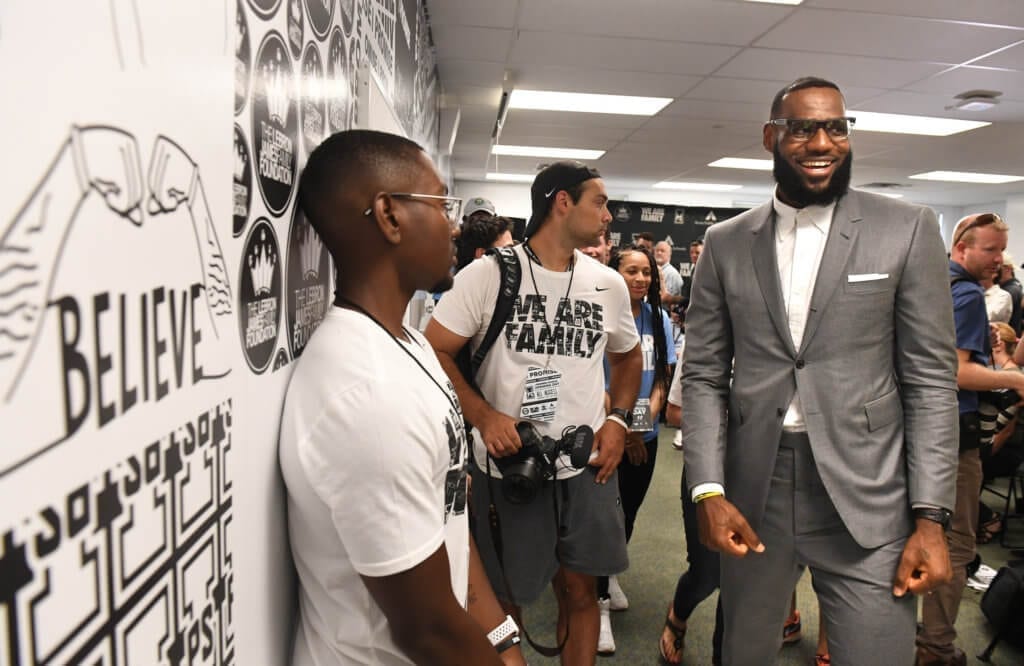 Instead, I Promise is a full-fledged part of Akron Public Schools, the 29th elementary school in the district. This helps keep the institution inclusive to its local student body.

It also raises questions about funding. Per the state of Ohio, Akronâ€™s schools were given just $10,028 in state and local funds per student in 2016 â€” more than the statewide average, but still a relatively low figure for a city of a little under 200,000.

Thatâ€™s not a lot of money to operate a school with such grand aspirations, which is where the LeBron James Family Foundation comes in. Jamesâ€™ nonprofit is the leader of a group of more than 120 donors, volunteers, and sponsors working to find the resources needed to keep exceptional educators on staff through a more demanding teaching schedule. 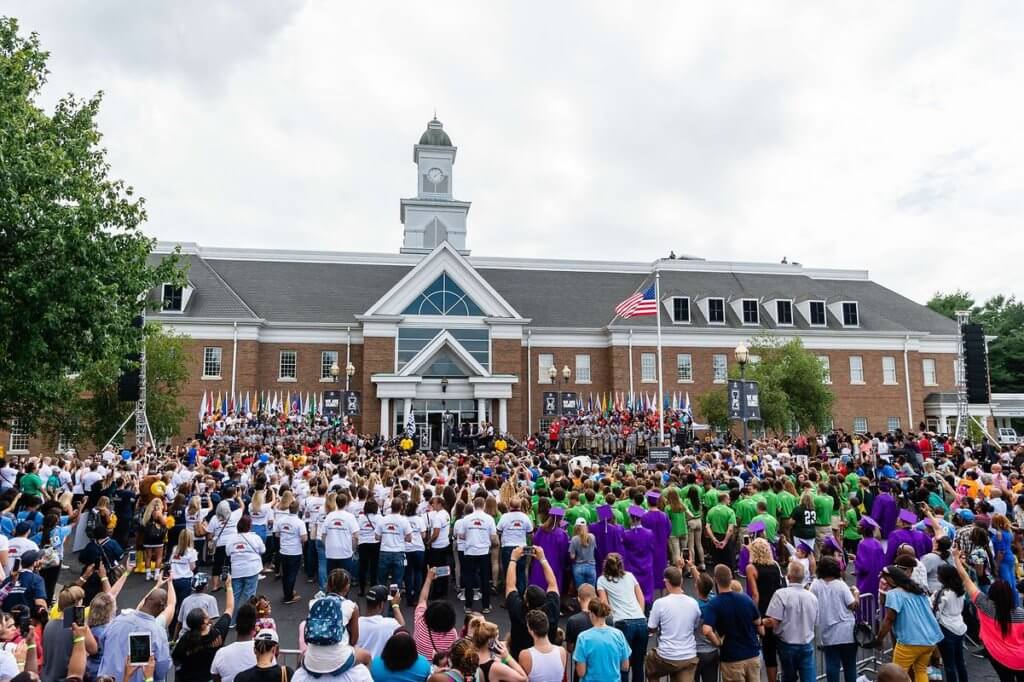 Since I Promise is a public school, that group also must have worked with Akronâ€™s local teachersâ€™ union to create a plan with which the coalition of teachers could agree. A quick look at the benefits available to those staffers shows the steps James and his cohort are making to attract and retain quality educators. From the Los Angeles Timesâ€™ profile on the school:

To truly provide emotional and psychological services for at-risk children and their families requires well-trained and supported teachers. The I Promise School gives teachers access to psychological services. Every Wednesday afternoon will be reserved for career development. James even hired a personal trainer to work with teachers who want a guided workout.

All their supplies also are provided by the school. That was a pleasant surprise for Angela Whorton, an intervention specialist at the I Promise School. Sheâ€™s been a teacher for 10 years and almost always had to spend her own money to properly stock the classroom.

Ten thousand dollars per student canâ€™t cover those services, but the buy-in from the LeBron James Family Foundation can. That will make I Promise a destination for ambitious teachers in 2018 and beyond.

I Promise is starting in the middle and expanding outward

The school opened Monday with 240 students spread over two grades â€” third and fourth. From there, it will add second and fifth grades in 2019 and then expand to a first through eighth grade lineup (there are no current plans to offer kindergarten) by 2022. This is going to be massive for the local community, in which education has taken a backseat, as survival has been the goal of many families. We all know that young kids should be free to engage in kids play with their friends, relatives or even whilst watching their favourite Youtubers.

Itâ€™s not unusual for new schools to start small and add grades over time. Most start at the beginning with a K-2 or K-3 lineup that introduces students to not only their school and curricula, but also to elementary education as a whole. From there, these institutions typically tack on their later grades year-by-year to accommodate matriculating students and ensure full coverage through the end of eighth or 12th grade. 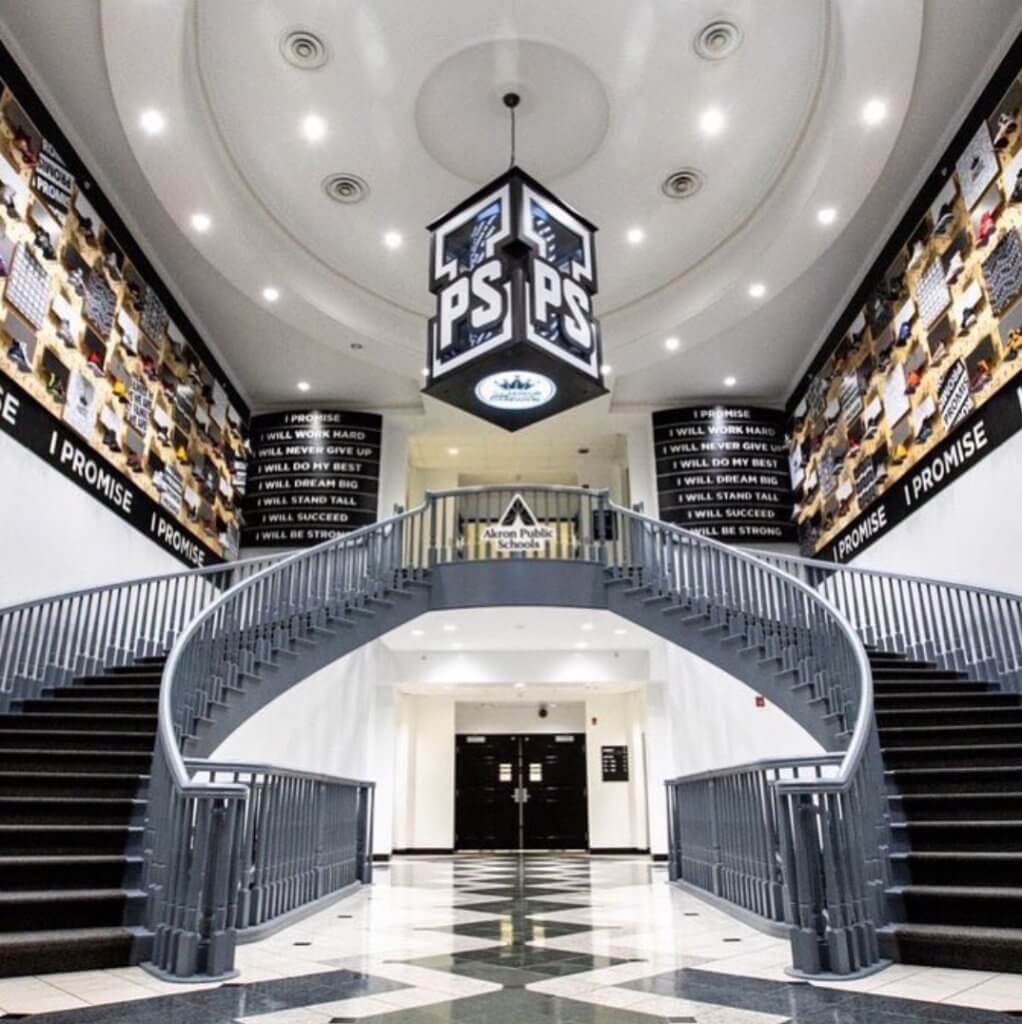 Starting at third grade is an interesting place to begin. Itâ€™s a logical extension of the I Promise Network, the foundation that laid the framework for the school by offering after-school and summer programing for more than 1,200 students in the city beginning after second grade.

It will create some challenges, however.

I Promise School will be getting pupils who have spent their first three or four years in schools Ohio has given an â€œFâ€ grade for student progress. Those first four years of early development are paramount to a childâ€™s future success. As an oft-cited education adage goes; â€œbefore grade three, youâ€™re learning to read. After grade three, youâ€™re reading to learn.â€ State data suggests Akronâ€™s students as a whole demonstrate below-average literacy skills as K-3 students. This threatens to create lapses in the early stages of of the new school as teachers struggle to accelerate student growth to meet I Promiseâ€™s standards.

There are safeguards in place to address this problem and boost these students.

One of I Promiseâ€™s key tenets is building connections to its students and its community. Creating a comfortable home life is one of the schoolâ€™s core beliefs, and it stretches beyond just the student. Parents can use the institutionâ€™s job and family services, study through its GED program, or design meals at the on-site food bank to cook at home. There are also counselors on staff to help children deal with the trauma that may arise in their daily life.

â€œI think the missing link in public education is that family wraparound support,â€ said Brandi Davis, the schoolâ€™s principal. â€œBecause our students come to school and theyâ€™re worried about things at home. â€¦ We want to create that safe, that secure and that caring and loving environment for our families and our students so that our kids can focus on education.â€ 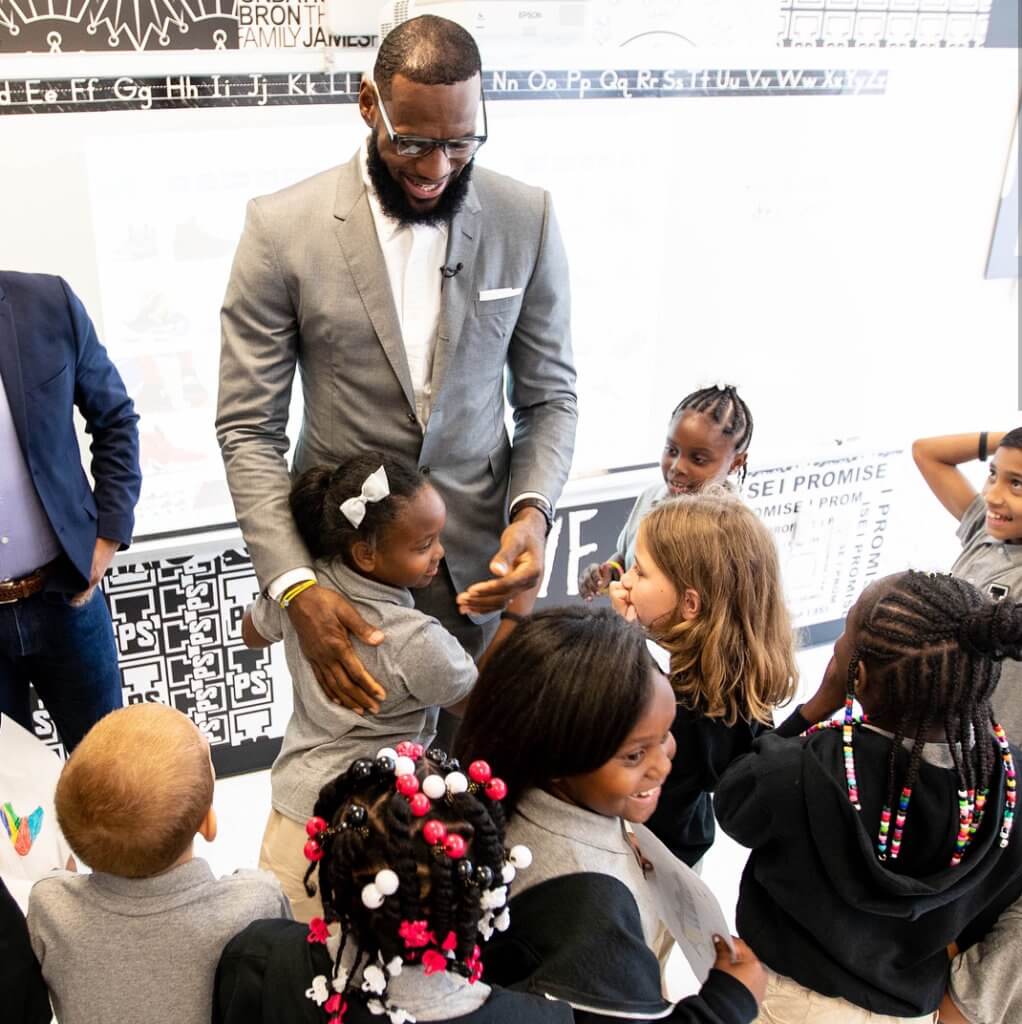 Last December, James laid the mission for his school out to Theresa Cottom of the Akron Beacon-Journal, painting a broad strokes explanation of why his school would be different. link

â€œWeâ€™re going to be on â€™em like a school should be because we want them to be successful not only in the school, but successful in life,â€ James said. â€œWeâ€™re gonna give â€™em everything that they need and give them criteria that they all can meet, depending on the individual. But itâ€™s going to be pretty cool to seethe kids at the school the first day we open.â€

Now heâ€™s seen it come to life, and heâ€™s right. It was pretty cool.

The high rate of death for black infants showcases the virulent brutality of institutional racism. Recent

Temika Morris says customers are usually surprised when they see her, but it brings them a

The high rate of death for black infants showcases the

Temika Morris says customers are usually surprised when they see