The full-service supermarket that Circle Food Store owner Dwayne Bourdeaux runs in New Orleans’ Seventh Ward is clean and stocked with locally sourced produce that arrives with days to spare.

The butcher cuts meat daily in the store and offers not only standard cuts, but also items that are locally popular—raccoon, pig lips, pig ears, rabbit, and so on.

Concerned about the rate of diabetes and hypertension among African-Americans—the majority of his customers—Bourdeaux not only sells healthy food, but also incentivizes it by offering $5 worth of free, fresh produce to those who spend $5 on it.

“You should serve the community, because it’s not all about making money,” says Boudreaux, an African-American in his early 40s, who lives seven minutes from the store he has worked at nearly his whole life, before taking it over from his father. “I’d sell more liquor, alcohol, cigarettes, and fried foods if I wanted to make more money.” 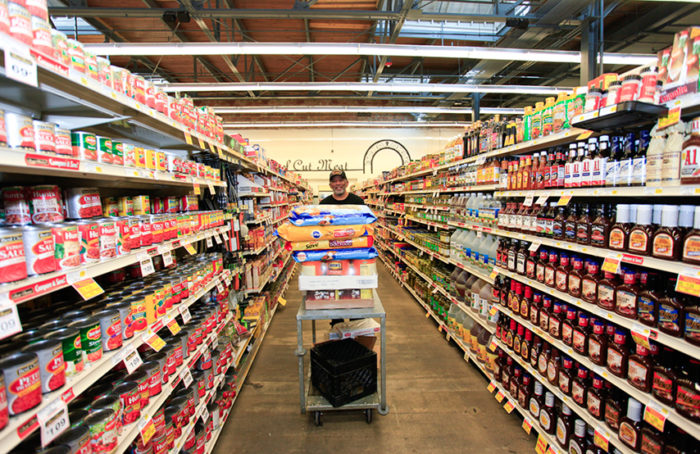 His is a rare success in Black and brown communities nationwide, but not for lack of effort. In fact, Boudreaux is one of the nation’s few remaining Black people operating full-service supermarkets.

No organizations track the number, but sources familiar with the situation and some of the remaining grocers suggest that fewer than 10 Black-owned supermarkets remain across the entire country.

And the number continues to shrink: In the past two years alone, Sterling Farms in New Orleans, Apples and Oranges in Baltimore, and several branches of Calhoun’s in Alabama have all gone out of business.

This is problematic because strong anchor businesses like grocery stores can serve as the center of neighborhood economies, recirculating local revenues through wages and nearby businesses. They can also be neighborhood hubs, where people go to buy good food as well as employment centers and sources of community pride.

But where there are no grocery stores, or where they’re not enmeshed in the fabric of the community, problems arise: Grocery store ownership directly ties to larger struggles and themes like economic stability, self-determination, power, control, and racial and class stratification, says Malik Yakini.

Yakini is the director of the Detroit Black Community Food Security Network, an organization that builds self-reliance, food security, and justice in Detroit’s Black community. When a neighborhood loses a local grocery store, he says, the African-American community essentially becomes what he describes as a “domestic colony.”

“[Black neighborhoods] are seen as a place for the more dominant economy to sell things,” Yakini says. “We’re more interested in building community, self-determination, and self-reliance. We’re interested in being more than consumers of goods that others bring to sell, and often goods that are inferior to what’s sold in the white community.

“We’re not a place to dump cheap goods,” Yakini continues. “African-American communities need to be producers of goods and stand eyeball to eyeball and shoulder to shoulder to other economic groups. Those that haven’t are subject to all sorts of abuse.”

The Delta Sigma Theta sorority donated 17,000 meals to disaster relief efforts in New Orleans after it was

Sesame Street is celebrating its 50th anniversary this year. The rush of stories
By now, you’ve heard of Iddris Sandu, the young visionary who landed
Much has been written on W. E. B. Du Bois and the
When Shanaye Jeffers was in fourth grade, she often skipped touch football
When I first met Chris, he was quiet—I could tell he was
Go to Top

Three years ago, We Dat’s founder, Greg Tillery started We